A while back I posted that Panhead Whitewall was a Belgian Wheat. I was later told that it’s actually an American Wheat. When I put that on Facebook, Mike (the brewer) said “it’s just a pale ale that uses a shed ton of wheat”.

So I guess the question is: is that a style?

Is a pale ale made with wheat an American Wheat? What if it’s an NZ Pale Ale, does that make it an NZ Wheat? Does it matter?

Let’s not leave those as rhetorical questions. My answers are: I guess so; probably not; and, no. That “no” needs some unpacking.

Trying to define a beer style is like trying to define the term “New Zealander”, really bloody difficult and bound to piss off more people than will agree with you. Try giving someone a Gunnamatta and telling them it’s just an IPA.

But styles give people a steer in the right direction. The words stout, lager, pale ale, etc have meaning. You can use those to refine the search for the beer you want, especially when shopping in a supermarket or bottle store. And at the bar it means the poor staff aren’t having to repeat themselves over and over when asked “What sort of beer is [clever beer name]?”

But in general, for drinkers, strict style categories are easy to ignore. Where you can’t ignore them is in awards.

Check out the style categories for the New Zealand Brewer’s Guild Awards. Each one of those has strict rules about what is and isn’t in that style. Moreover some categories aren’t really styles at all, so various beers are mixed in together. For example, 2016’s Specialty, Experimental, Aged, Barrel, Wood-Aged trophy winner was Croucher Low Rider, a 2.5% pale ale, beating out sours and whisky porters.

If a brewer puts a beer in the wrong category it could mean the difference between getting a medal and getting nothing. And entering isn’t cheap, so for some breweries making that choice is a cost they can’t afford to make.

A little while before the 2016 Brewer’s Guild awards, Kerry Gray of Choice Bros put a post on Facebook saying (among other things):

“Styles are increasingly becoming blurred and ignored. As a small business, there is plenty I can spend that entry money on with real return and benefit. So, what’s my motivation?

I am looking forward to attending and high five’n my peers who win, but at this stage, I may not enter…”

It was a good post that started some conversations about how beer awards are structured and how relevant they are for smaller breweries. Over a month later Kerry’s “red IPA with a touch of ginger”, Reet Petite, picked up the trophy for Flavoured and Aged beers. 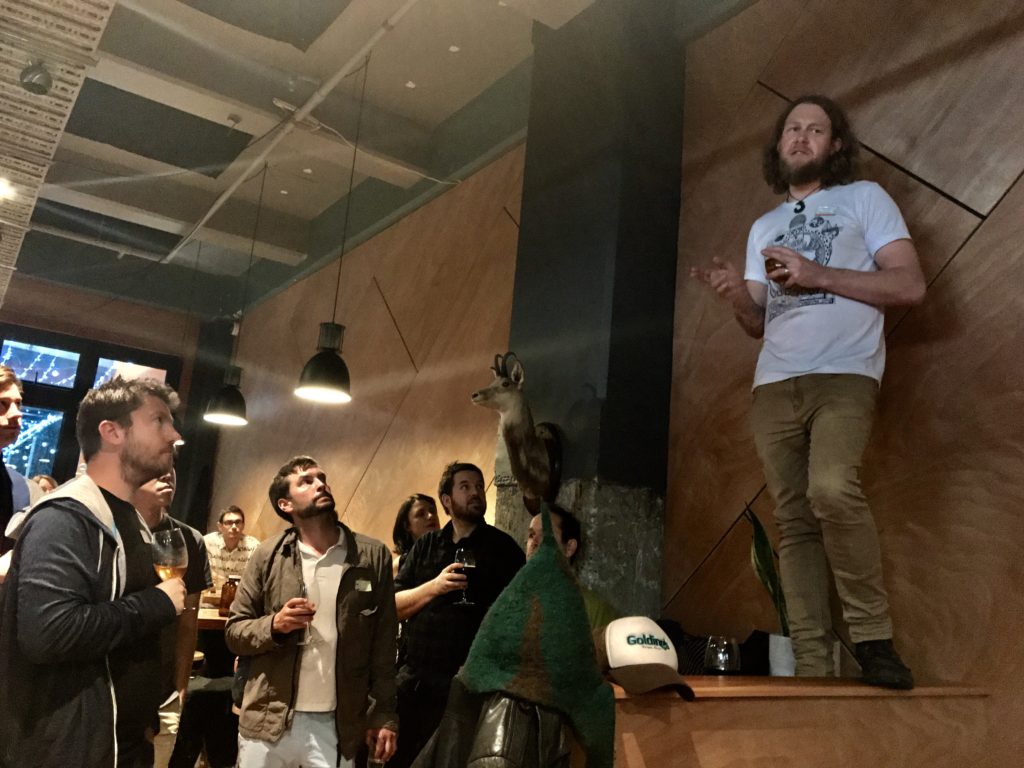 In between the post and the award I sat down with Kerry in the space that would become his brew pub, Husk. I wanted to know how he made beers. It involves reverse engineering, to a certain extent.

“I think about the final product, how I want the beer to taste and I figure out how I’m going to make that beer.” It a process that’s worked for all of his creations including On the Brain, listed as a peanut butter & raspberry ale.

“I knew I wanted that to be bready, so I was thinking wheat and English malts. But balance is important, so I use the style to balance the beer. Balance is always first.”

This means that On the Brain is actually an English Ale as Kerry found a complimentary recipe to base the beer on and melded that into his idea of a peanut butter raspberry beer.

“Part of the fun of fooling around with stuff is going ‘there’s something in that’. You get a better understanding of ingredients and then it becomes easier to get that balance.”

So what about Reet Petite, that Red IPA with a touch of Ginger.

“It says ‘red IPA’ on the label but it’s not. The IPA category is too broad. There’s session IPAs, fruit IPAs…IPA has become a ‘brand’. I can buy a good, perfectly to style, IPA… but why?”

Beer makers have traditionally not liked style guides. The infamous Reinheitsgebot, for example, can be seen as a very extreme version of a style rule. So it makes sense that brewers will eventually rebel against their beers being forced into silos.

And something tells me Kerry would be happy being a rebel.