It was that week again. The Road to Bankruptcy week. The middle of August hits my bank account like a high-powered vacuum cleaner.

It’s also The Road to FOMO and trying not to be hungover at work the next day.  There’s so much to eat and drink, that kuidaore (食い倒れ, the Japanese idea to ruin oneself by extravagance in food) is a serious possibility.

It is, of course, the week leading up to Beervana, New Zealand’s biggest beer festival. A glittering prize, like the fabled Emerald City of Oz, sitting at the end of the Yellow Brick Road. For years this “road” was underutilised: a week that featured at best a trade event and maybe a few tap takeovers. But in recent years, it’s been given new life.

It’s now called the “Road to Beervana” and has grown into a series of events that are well worth putting yourself into debt for. I’m telling you about them after the fact for a couple of reasons. Firstly, it feels dumb preemptively writing about food and secondly, to prepare you for next year. It feels like to fully appreciate the Road to Beervana you need to start saving now.

I couldn’t go to many of the events due to budget constraints. But I did manage a few.

The first was Kushi. It was a Japanese themed night at Grill Meats Beer (where thankfully, I eat for free). Kushiage skewers done on the grill and served alongside Baird Beer.

I visited Bryan Baird back in 2010 at his Numazu brewery and in 2012 I held a Yeastie Boys tasting at the Baird Nakameguro Taproom. Bryan’s a tough nut to crack, but he’s passionate about beer. He has strong views about the Japanese brewing industry, mostly negative ones about the organisation and positive ones about the breweries. He would certainly hate that I put BABYMETAL in this post.

Bryan’s an American making American-style beer in Japan, a country where beer sales are trending downwards and most beers are German-style lagers. But Baird is making a solid stance. Last time I was in Tokyo, Baird had three taprooms (not including the one near the brewery on the Numazu waterfront): Nakameguro, Yokohama, and Harajuku.

The Harajuku was the first Baird bar I went to. I had gyoza (ギョウザ) and a Baird NZ IPA. While I was focused on what hops were in the beer I should’ve paid more attention to the fried dumpling. The chef in the Harajuku taproom was (and possibly still is) striving to make the most perfect gyoza. A truly noble goal.

Back in the bar, my partner and I were sitting with Fritz and Maria, beer writers and gin makers from Nelson, and Dominic Kelly, of Beer without Borders who import Baird Beer. We were happily making our way through the menu.

I said the Baird makes American-style beers, but that doesn’t mean there isn’t a strong Japanese influence.

I, somewhat rashly, ordered the Tale Ale because it was the first on the list. The beer that arrived was opaque and weird. But good weird. Based on an ume plum sour, the beer was tart and light. After hearing the ume description I could pick out the flavour but before that I thought it tasted like a peach yoghurt a day after its use-by date, but without the creaminess.

I dubbed it a Japanese Gose.

I’ll be honest, I could’ve happily made my way through the entire beer list if it wasn’t for two things: beer writing doesn’t pay that well and I had to drive. but I did have a Teikoku IPA and I was so glad I did.

It was, for me, the perfect beer to go with skewers. A beer that doesn’t mess around (like its creator) and hits you with the hop flavour but without resin and without an accumulation of acid at the back of your throat. 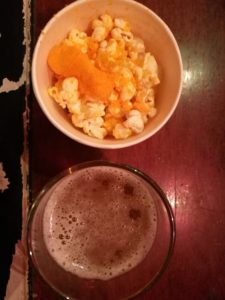 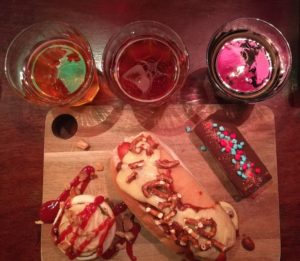 The other event we got to was the Panhead Junk Food matching at Golding’s Free Dive. It blew my mind.

The matches were: Whitewall with Twistie-dusted popcorn (I can’t eat Twisties and dislike Belgian beers but loved this match); Supercharger with a potato-top savory drizzled with tomato sauce and pork rinds; Big Yank with a chili-dog, cheese sauce (made from cheese slices) and crushed pretzels; and lastly Hardtail Henry with a Eskimo Pie dusted with pop-rocks and Nerds.

You haven’t lived until you have a mouthful of barrel-aged stout and pop-rocks.

But this is exactly the kind of madness I love about the Road to Beervana! Like it’s Australian cousin “Good Beer Week” in Melbourne, the Road is about adventure and pushing the boundaries of beer with food. Good matches, weird matches, awful experiments and flat out stomach-satisfying, Instagram-perfect, food with mind-expanding, palate-tingling beer.

[Update: I called Whitewall “Belgian”, thinking it was a Belgian wheat. It’s not. It’s also not an American Wheat. It is actually “just a pale ale that uses a shed ton of wheat”, so says Mike Neilson, the brewer.]